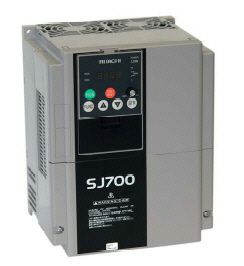 FREE SHIPPING on the SJ700 Series Inverters (ground service using our choice of carrier, within the contiguous United States only)

Hitachi has also greatly simplified the auto-tuning process, making commissioning trouble-free. Enhancement in the SJ700 is Hitachi’s EzSQ (Easy Sequence) built in programming function. It is similar to having a PLC built into the inverter! In many cases, the need for a separate PLC can be eliminated. The program is developed on a PC and then downloaded to the inverter using the simple to use EzSQ software provided at no charge.

The SJ700 also incorporates true servo-like position control, offering a low-cost motion control solution. Mated with a general-purpose induction motor with an encoder, the SJ700 is given a position command, speed command, and acceleration/deceleration times. The shaft moves from position A to position B following the defined profile and then maintain the shaft in servo lock status.