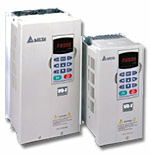 The word “drive” is used loosely in the industry. It seems that people involved primarily in the world of gear boxes and pulleys refer to any collection of mechanical and electro-mechanical components, which when connected together will move a load, as a “drive”. When speaking to these people, an AC drive may be considered by them as the variable frequency inverter and motor combination. It may even include the motor’s pulley.

People in the electrical field and electrical suppliers usually refer to a variable frequency inverter unit alone, or an SCR power module alone (when discussing DC drives) as the “drive” and the motor as the “motor”.

A variable frequency drive is an adjustable speed drive. Adjustable speed drives include all types; mechanical and electrical. Now is it clear? Don’t worry about it. It’s not clear to anyone. As you read on, when I refer to the “drive” I am referring to the variable frequency inverter alone.
A little about AC drives
The main power components of an AC drive, have to be able to supply the required level of current and voltage in a form the motor can use. The controls have to be able to provide the user with necessary adjustments such as minimum and maximum speed settings, so that the drive can be adapted to the user’s process. Spare parts have to be available and the repair manual has to be readable. It’s nice if the drive can shut itself down when detecting either an internal or an external problem. It’s also nice if the drive components are all packaged in a single enclosure to aid in installation but that’s about it.

The paradox facing drive manufacturers today is that as they make their drives easier to use, the amount of training with which they must provide their users increases. This is because as drives become easier to use they are purchased more and more by people of less and less technical capability. As less technical people get involved in drive purchases the number of misapplications goes way up. I call this phenomenon the “dumb trap”. (When manufactures discover this phenomenon they simultaneously discover how dumb they’ve been. Some have not yet discovered it.)